Everything You Need to Know Before Visiting the Faroe Islands!

When I was planning my trip to the Faroe Islands, I wasn’t able to find many resources on important things to know before visiting the Faroe Islands because it isn’t a main tourist site yet. Thankfully, travel blogger friends Megan from Megan Starr and Tina from Traveleidoscope have been and let me ask them a ton of questions that put my mind at ease. So I thought I would compile a guide to the Faroe Islands for anyone planning a trip there who doesn’t know someone who’s been before (and feel free to send me any questions you have!). So here are all the important, practical things to know before visiting the Faroe Islands, including everything from driving in the islands to where to find public bathrooms! 🙂 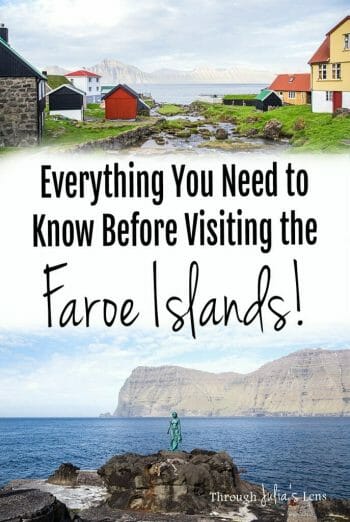 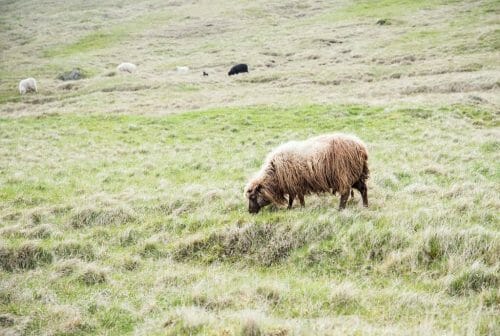 The Danish krone and the Faroese krone are both accepted currency since the Faroe Islands are a part of Denmark. Most places took credit and debit cards without any problem, too.

Faroese is the official language of the Faroe Islands, but Danish and English are spoken there (and signs are in English). You’ll be fine speaking English, but learning how to pronounce the city names would be beneficial, especially if you need to ask for directions. 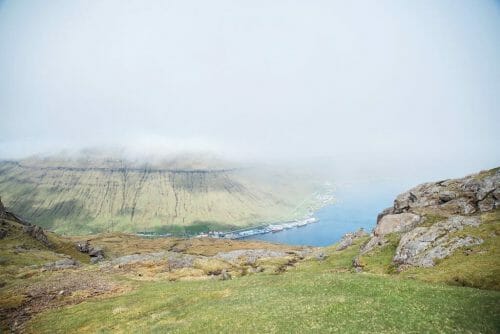 Getting to the Faroe Islands

You can take a boat to the Faroe Islands from a few different places, but those take much longer (and can be more expensive) than a plane. But you can take your car on the boat so you wouldn’t have to rent one in the Faroes.

There aren’t many places that fly directly to the Faroe Islands yet, but they are expanding! Matt and I flew from Copenhagen because we were there for a trip already, and the flight was about 3 hours and cost a little under $200 USD roundtrip. I heard a rumor that there might be direct flights from New York in the future, but if you’re coming from the US, the easiest way is to fly to Iceland and then catch a flight from there. 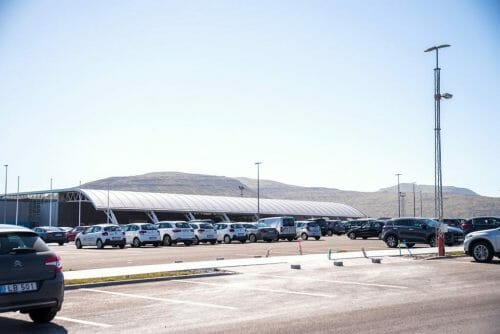 Scandinavian Airlines and Atlantic Airways are the only two airlines that fly to the Faroe Islands right now. We flew Atlantic Airways and everything was great! I’ve also flown Scandinavian Airlines before and had no issues. The Vágar Airport is small but really nice. Because there are so few flights, they actually wouldn’t even let us go through security until right before our flight, but there is a cafe and a lot of seating outside the terminal.

Driving around the islands

If you don’t drive, you can book buses around the islands, but if you can drive, then renting a car is easiest. I’m not sure if the buses can even get to some of the towns because the roads are so narrow! They do drive on the right side of the road like in Denmark. There are a few different car rental companies, and we just used Hertz because I’ve used them before. You pick up and drop off your car in the airport (all of the rental companies are grouped together, and it’s a small airport so you can’t miss them), and the process was easy and painless. I booked the car about a month before the trip, and I would recommending booking as early as possible, just in case.

If you don’t drive manual, the car rental is NOT cheap. I’ve never driven manual in my life and I wasn’t about to learn in the Faroe Islands! For only being there for three days, it cost a few hundred dollars (including insurance and all that) to rent the smallest car we could. 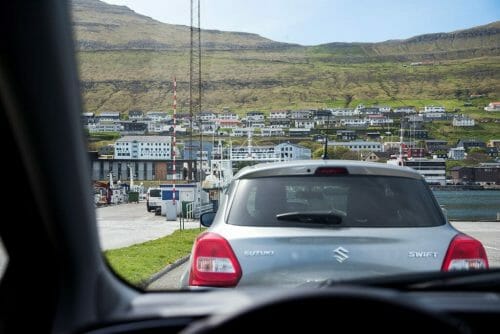 Even though a few of the drives were the most terrifying I’ve ever done, I was pleasantly surprised with how well maintained the roads were! I don’t think we even saw a pothole or any major bumps. That being said, some of the drives are not for the faint of heart! There are many where it’s a one lane road for two way traffic on the side of a cliff, AND there are one lane tunnels for two way traffic! I had never driven in a place like this before, so it was pretty nerve-wracking at first.

Along the roads, there are a few wider spots to pull off (though not as many as I would have liked), and there are some cut outs in the tunnels to pull off into, as well. If you are on the side of the road or the tunnel that has the pull off area, YOU are the one that needs to pull off (it took a few times before I figured that out in the tunnels because I was so nervous!). Also, these tunnels are no joke! They are incredibly dark and super long. A few of the ones we were in went on for miles! Before you drive off the lot in your rental car, make sure you figure out how to turn the car’s lights on so you’re not in a tunnel before you realize your lights don’t turn on automatically (yep, speaking from personal experience!).

There are a few toll places before tunnels, but if you have a rental car, the tolls will just get added on to your bill. We used surprisingly little gas, so we just filled up the tank before dropping the car off at the end of our trip. There are a few gas stations in the bigger towns and around the airport.

One thing that surprised me, the Faroe Islands locals drive FAST. I can’t tell you how many times I would be going a little over the speed limit when dozens of cars at a time would pass me to go twice as fast as the speed limit. Just be aware of it and let them pass you. 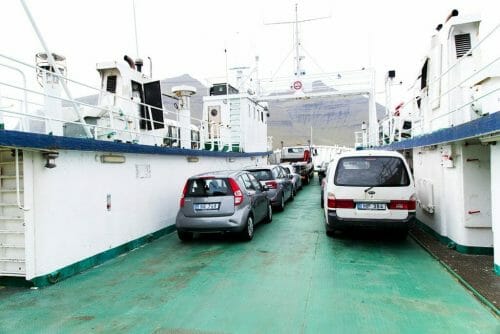 Some of the places don’t have roads or tunnels to them, so you’ll need to take a ferry. We took one from Klaksvík to Kalsoy (get in line really early!) and you’ll need one to get to Mykines to see the puffins. If the weather is especially bad, the ferries could get canceled, so make sure you keep an eye on the weather and have a backup plan, and the ferry hours also change depending on the season. 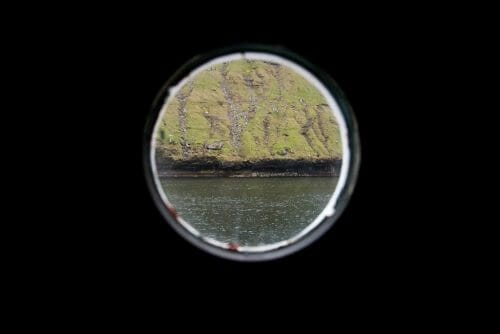 Buses in Tórshavn are free! We didn’t end up taking any because it’s pretty small and we could walk everywhere we wanted to go, but if you spend more time in Tórshavn, you should check out the bus line.

We got lucky in Tórshavn and our B&B had parking, but there are some parking lots and street metered parking around the city. In the other villages we visited, there were free public parking lots that were pretty easy to see (a lot of the villages are just small groupings of houses so you can’t miss the parking lots).

I didn’t start looking for places to stay until about a month before our trip when we finalized plane tickets, so you’ll probably have better luck the earlier you start! (And you’ll probably find cheaper deals earlier, too). Most of the places to stay are in Tórshavn, the capital, so a lot of people use it as a home base. We had a tight schedule, so we spent one night at a B&B in Tórshavn and I looked for accommodations closer to where we would the second day, and there weren’t many options for the date we needed. There are some Airbnbs scattered around the islands, and we ended up staying in a guesthouse in Gjógv, which was really nice! 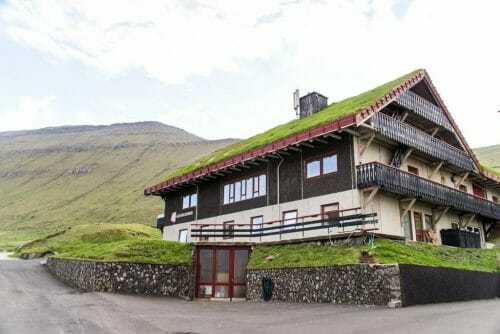 So plan ahead and book accommodations as early as possible, and if you’re having trouble finding places to stay around the islands, consider using Tórshavn as a home base!

Public bathrooms probably aren’t something you think about before visiting a place, but since most of the villages I visited in the Faroe Islands had fewer than 100 people, it was something I was concerned about. And I was pleasantly surprised to find that every single tiny village we visited had a public bathroom! (With the exception of the hike to the Hanging Lake since it isn’t in a town, but the airport is a few minutes away if you need a bathroom before you hike). 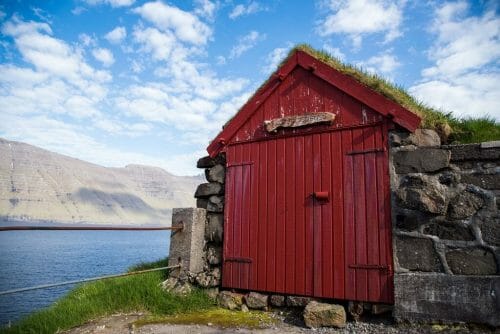 Even the ferry to Kalsoy had a bathroom! (On Kalsoy, there wasn’t a bathroom before the hike to the lighthouse since it’s next to someone’s farm, but there is one by the Seal Woman statue). At every village we visited, there was sign with information about the place we were in, and it usually had a map of the area with directions to the bathroom. Shout out to the Faroe Islands for being so helpful to tourists!

I definitely recommend bringing some granola bars and snack food with you! You can also stock up when you arrive, but from what we saw, the grocery stores weren’t very cheap. None of the small villages had any restaurants, but we did eat in restaurants in Tórshavn, Klaksvík, and at our B&B in Gjógv. Other than that, we had granola bars and picked up a couple of things from a grocery store in Klaksvík. 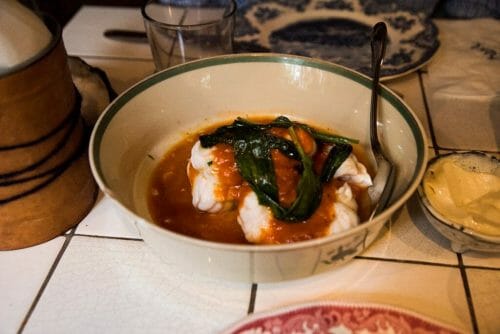 The restaurants we went to weren’t cheap (but there are some more affordable ones if you can do research, but we didn’t have any data to look things up!), and the beers we had in a bar were probably the most expensive we’ve ever had. So be prepared for more expensive prices than you may be used to.

I mentioned this in my packing list post, but I definitely recommend getting a SIM card! We got a hot spot, and it didn’t work AT ALL the entire time we were there. Getting a SIM card means you can use Google Maps when you’re driving and use your phone in case of emergency, so I highly recommend getting one for a remote place like the Faroe Islands where you’re driving everywhere. 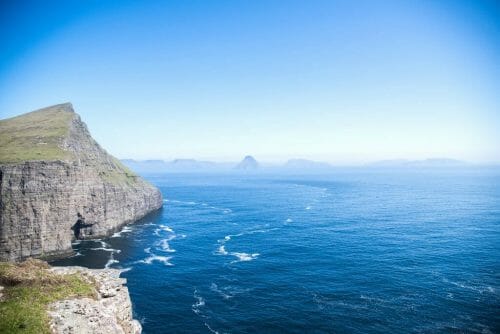 The Faroe Islands have a fairly moderate climate. Winters are above freezing on average, and summers are 50-60°F. When we were there at the end of May, it was in the upper 50s and surprisingly sunny, but it can be rainy and windy a lot of the time, so dress accordingly!

Since the Faroe Islands are pretty far north, the days are short in the winter and long in the summer. At the end of May, the sun never really seem to “set,” and it was still light out after we went to bed and well before we got up. It’s really nice for being able to hike in the evening, but it’s not so nice if your hotel room has a skylight or windows with thin curtains! I hope that covers all the important things you need to know before visiting the Faroe Islands! 🙂 Feel free to ask me any questions if you’re planning a trip there!

For more trip planning for the Faroe Islands:

The Ultimate 3 Day Itinerary for the Faroe Islands for Amazing Views & Cute Sheep!

What to Pack for the Faroe Islands (Including What I Should Have Packed!)

« What to Pack for the Faroe Islands (Including What I Should Have Packed!)

18 Comments on Everything You Need to Know Before Visiting the Faroe Islands!