I’ve found the prettiest cobblestone street in Aarhus and maybe even in Denmark! 🙂 When I was exploring downtown Aarhus, I happened to stumble upon Møllestien, a cobblestone street with colorful houses dating from the 18th century. I didn’t see a single person there, so it isn’t a big tourist area, which is perfect for this photographer! It’s just a short walk from the main sights in downtown Aarhus, so if you’re visiting Aarhus, don’t miss taking a stroll down Møllestien! 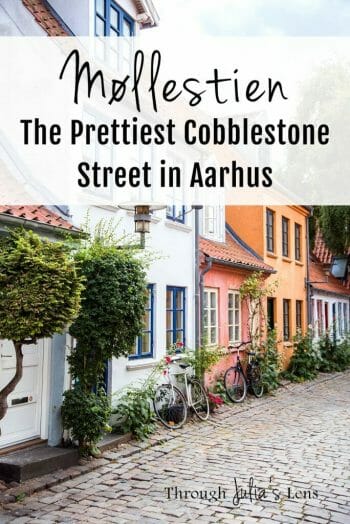 If you follow my blog or follow me on Instagram, you probably know how much I LOVE colorful places. Burano Island in Italy and Charleston, SC are two of my favorite places for their bright colored houses, and Møllestien is one of my favorite places now! Each of the houses was a different color and some houses were white with pops of color on the doors and windows, and it was really interesting to see such a variety of color. I couldn’t pick my favorite house!

Møllestien, which means Mill Lane, dates back to the Viking Age, according to a recent archaeological dig, but these half-timber houses weren’t built until the 18th and 19th centuries. The houses were originally just one story, and the style is called “outhouses” or “booths.” They were made with only one or two windows and a door, but most of the houses today have added more space and windows. They still maintain the old-fashion style though. 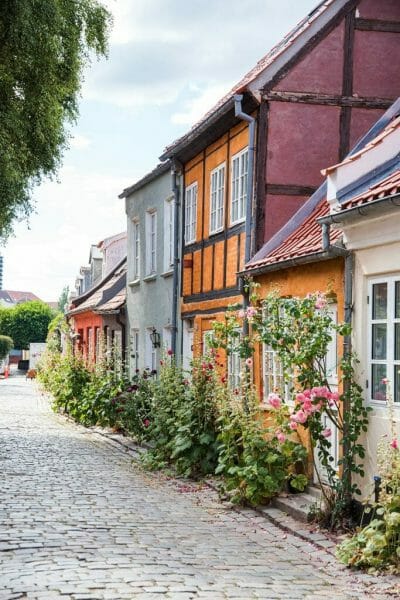 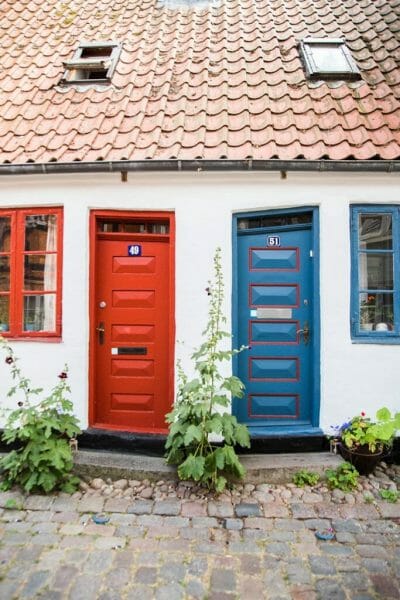 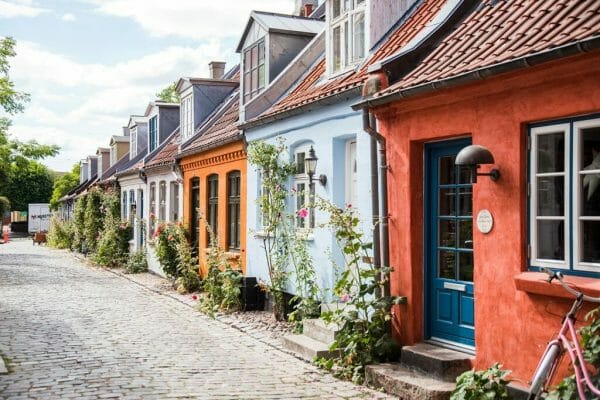 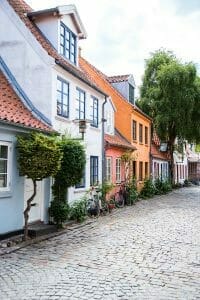 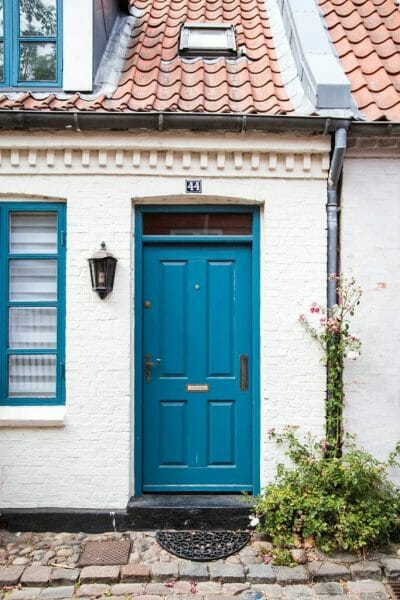 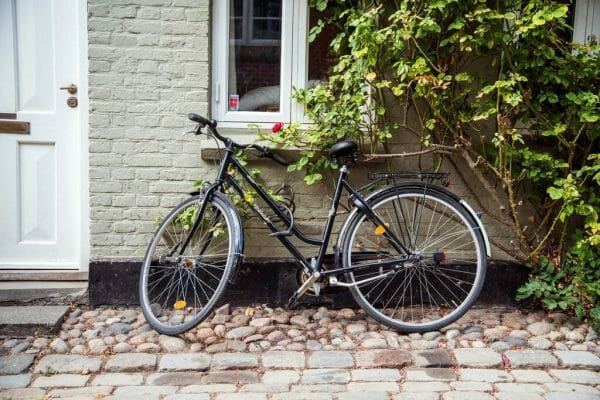 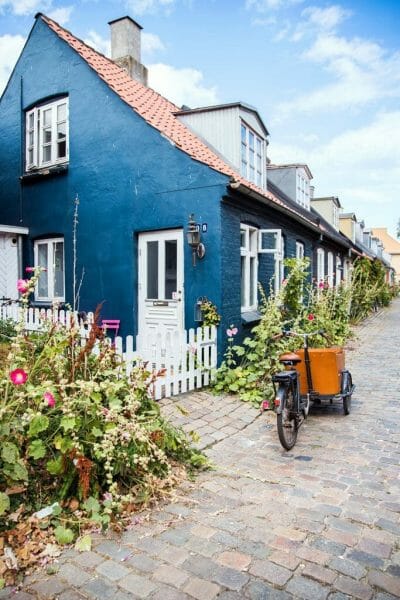 The street was actually longer, but the houses deteriorated in the early 1900s and weren’t maintained so some parts of street were torn down to build new homes. Thankfully, the city started renovating the houses that remained in the 1960s. Today the street looks just like it was in the 1870s! I love how colorful the houses in Denmark are and Møllestien was one of the most colorful streets I’ve seen there yet 🙂 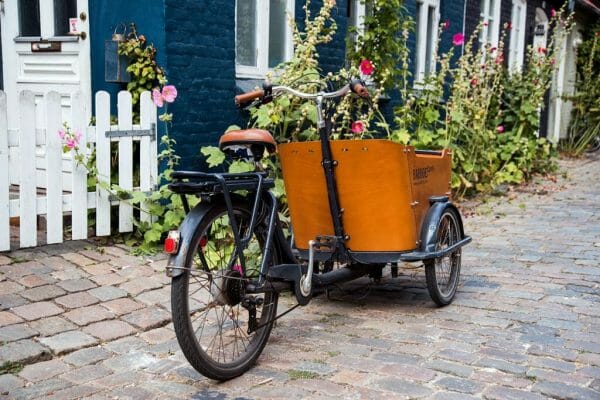 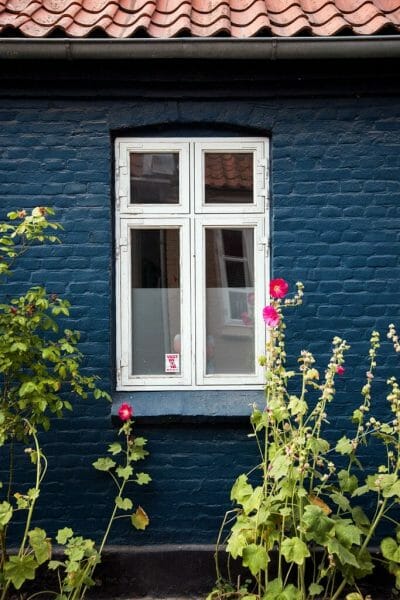 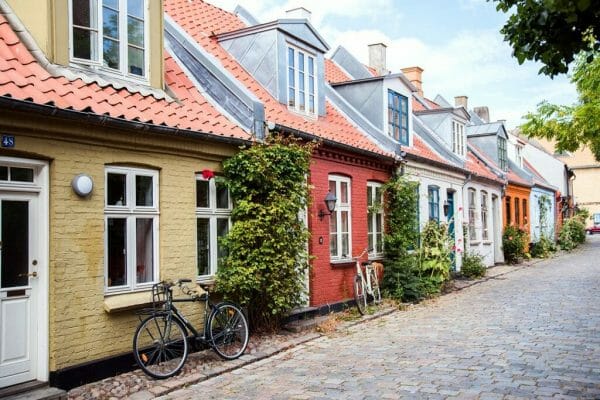 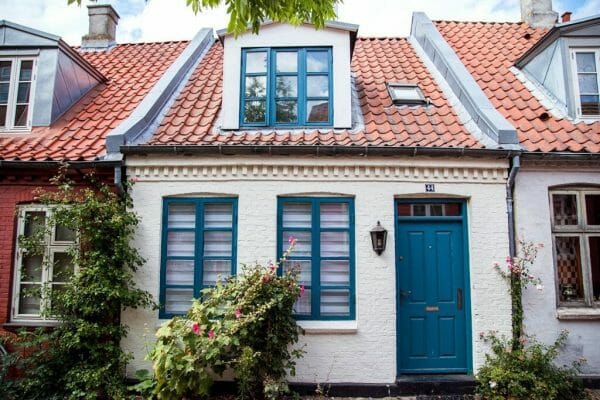 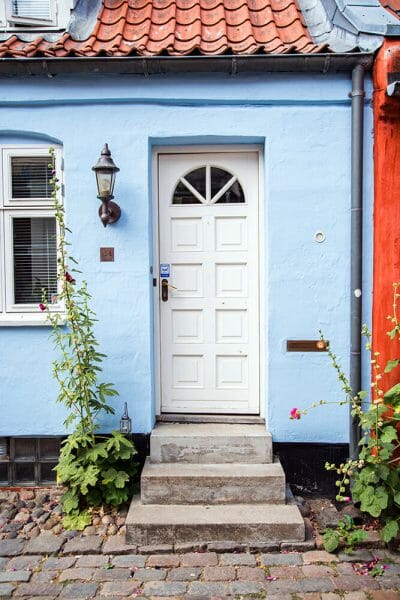 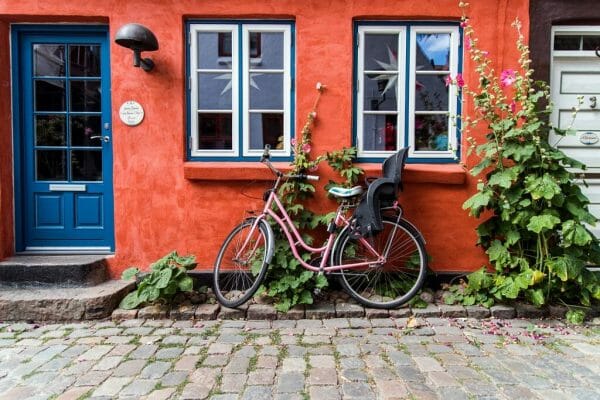 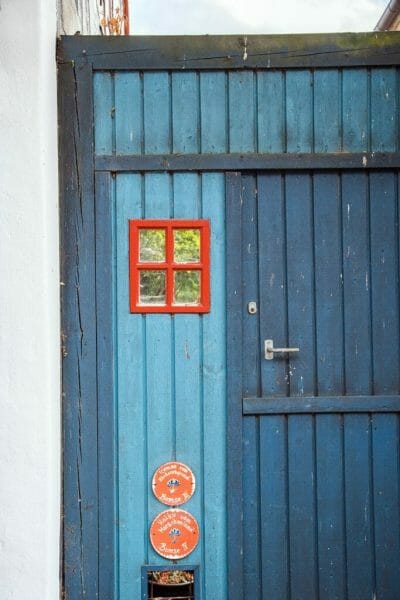 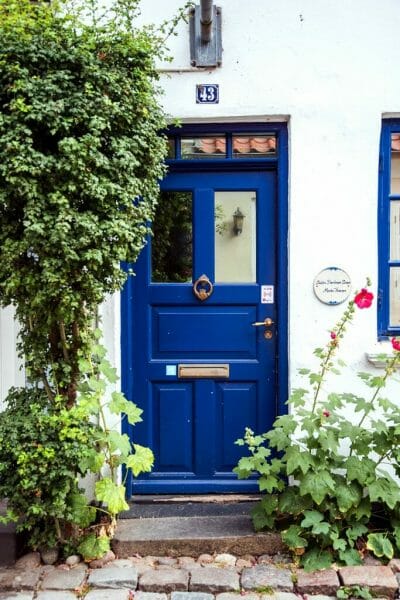 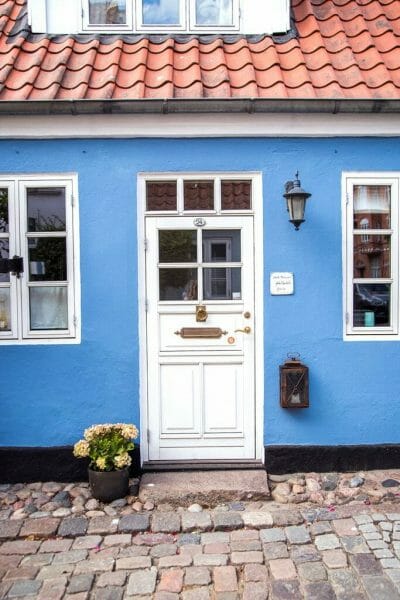 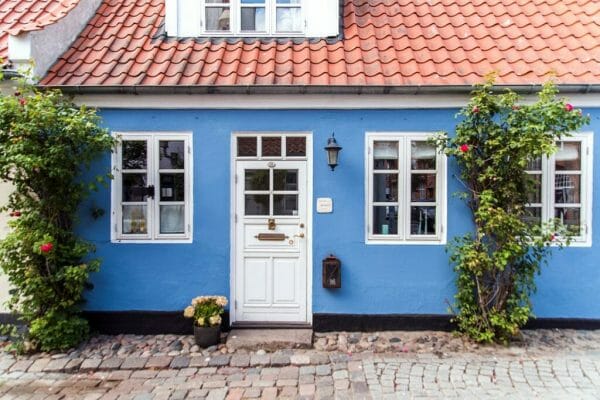 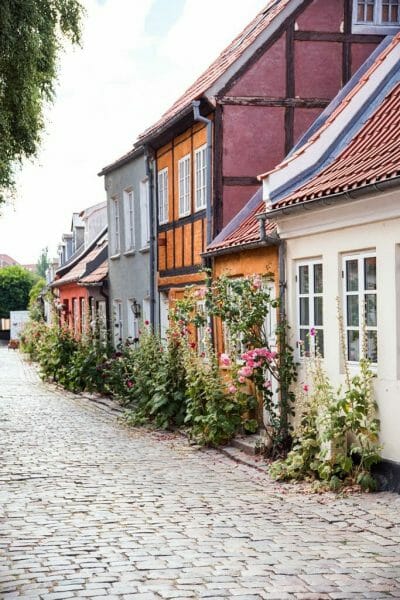 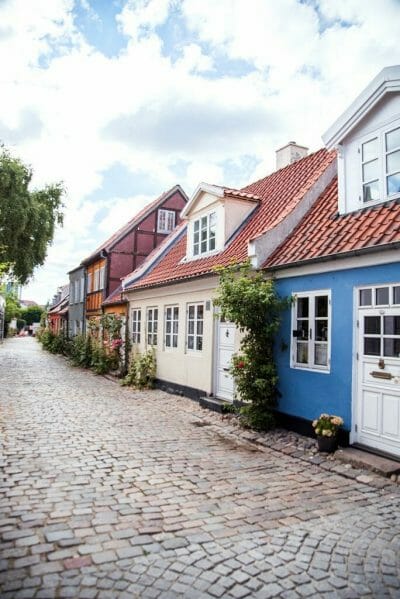 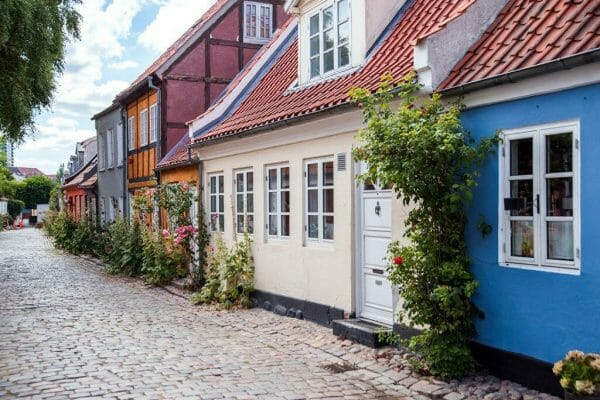 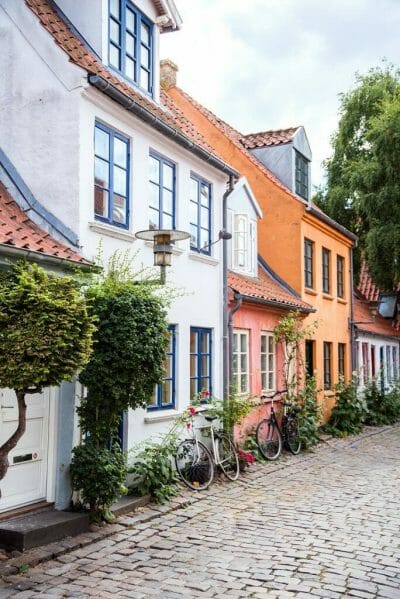 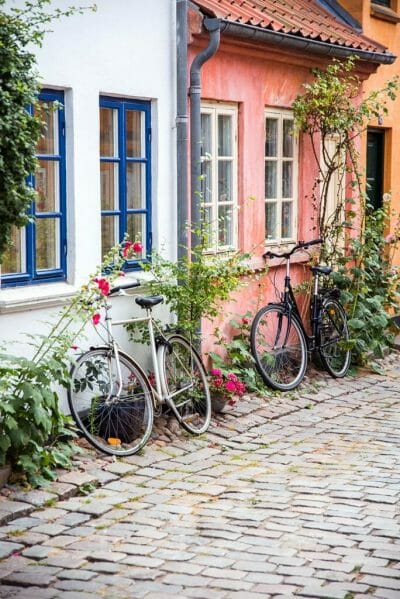 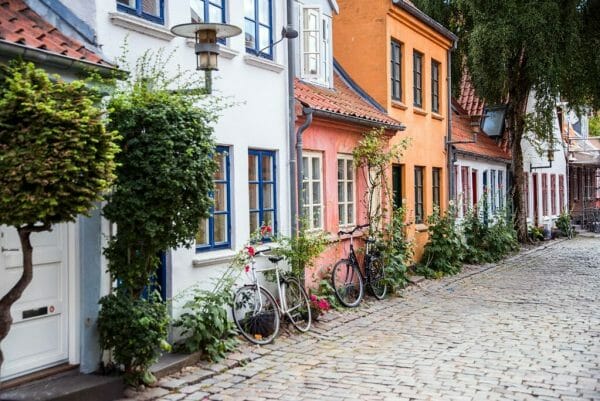 So if you are in Aarhus, you can’t miss Møllestien! Even though it’s right downtown, it’s so quiet and peaceful without crowds of tourists, which makes it great to take photos. And I definitely recommend going in the spring or summer when the flowers are in bloom! 🙂

Den Gamle By: Walk Through History in the Colorful Old Town Aarhus »

2 Comments on Møllestien- The Prettiest Cobblestone Street in Aarhus