Top Dessert Spots for a Food Tour of Seattle

Do you want to go on a food tour of Seattle for your sweet tooth? You’re in luck because the awesome Jess Tupper has some great dessert recommendations! Jess is a freelance content strategist, and runs a food and dessert blog. She is a self proclaimed chocolate geek and has a lot of experience taking pictures of food with her Canon Rebel t2i and 100 mm lens. On this guest post, Jess is taking you on a dessert tour of her hometown Seattle- try not to get too hungry!)

Jess’s top dessert spots for a food tour of Seattle So you’re going to visit and want to do a food tour of Seattle? Great! We have so much epic stuff, it can be hard to figure out where to start. As your resident dessert geek (and a former tour guide), here are some of the places I’d send you, based on the type of food trek you’re after.

You want to feel like a Seattleite by visiting top tourist spots, but better: The Daily Dozen & Fran’s

You’re already planning to go straight for the original Starbucks. (Be warned: there is always a line. Always.) But you also want to one-up everyone who came back and said how much Pike Place Market rocked. So let’s go for a twist: Fran’s and the Daily Dozen Doughnut Company.

Daily Dozen sells tiny doughnuts. That’s it. Bring cash (about $4-$6/dozen), order something fresh off the hopper, rejoice. (The frosted ones are good, but for this you want cinnamon sugar or plain.) It’s right off the flying fish stand, so you can cover two tourist bases while you’re waiting in line. Before you eat them, head south/downhill on 1st to Fran’s. Look at the truffles arranged with more care than any Tiffany’s store! Gasp at President Obama’s favorites! Then – order a hot chocolate. For there. And dunk your doughnuts in it. (I’ve done this in the store, but if that feels uncomfortable, order your hot chocolate to go and then sit outside and watch the ferris wheel.)

Maybe you’re from Portland and you want to see how Seattle does its thing. Or you’ve been hearing about all our fancy food trucks. So head to Westlake Park (the concrete triangle area across from Westlake Center) on almost any Wednesday and get yourself some food truck dessert goodness.

Mind you, they’re very different desserts. BeanFish Taiyaki sells taiyaki, fish-shaped stuffed waffles with fillings ranging from red bean to vanilla custard. I’m a fan of the Elvis, peanut butter and banana stuffed taiyaki that’s pretty spiffy topped with cinnamon sugar. And Lumpia World has lumpia, hot and crispy and beautiful. While you should totally try their whole menu, you need to get their coconut dessert lumpia, which gets decked out with caramel sauce and coconut flakes. I have a super hard time sharing these, even cold the next day. Believe me, sharing with my spouse? That was tough. Learn from my mistake and buy at least one taiyaki and two dessert lumpia per person.

You want adventure with your dessert: Hot Zombie Night at Intrigue Chocolate

Hot Zombie is pretty much the best free dessert in town – if you’re up for it and in town that day. Held on the first Thursday of the month from 6-8 pm, Intrigue Chocolate takes all their spare ganache and shoves it in a pot with some heavy cream, sugar, and salt, and serves it up as pudding-thick hot chocolate. There can easily be 20+ flavors involved, from everything bagel to molasses. And somehow, it works. It really, really works. And often, you’ll get a second cup to take home. Put that goodness in the fridge, and it’ll solidify into one amazingly mishmashed chocolate truffle.

And if you’re willing to venture a block or so out, you’ve got Regent Bakery, Gnocchi Bar, Mighty-O Donuts, and a ton of other stuff. There’s even a pretty decent pastry shop inside Seattle Central Community College. (Which makes sense, as it’s basically homework from the pastry classes.) Best of all, it’s off the First Hill Streetcar, so you can go back downtown and eat more desserts. 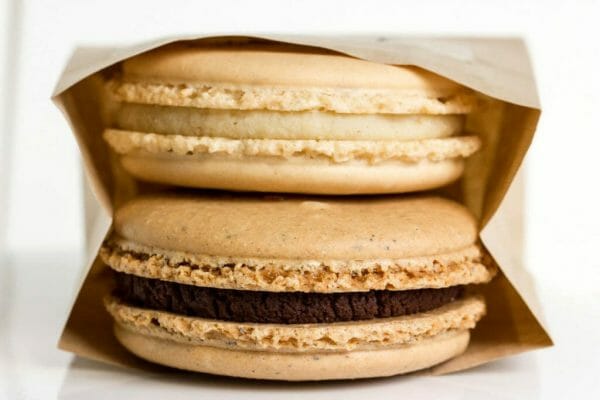 And if you go on a Sunday, there’s also the Broadway Farmer’s Market. SCCC will be closed, but Miri’s Poffertjes might be there, along with 314PIE. You’re welcome.

Pro tip: map out your must-eats in advance. It’s super easy to pass three bakeries and fill up before you reach what you absolutely wanted to try.

You want dessert with a serious view: Canlis, Goldfinch Tavern, or Sky City at the Needle

Yeah. I can’t really add on anything here. Canlis is pretty much a Seattle institution, Sky City is the restaurant all the tourists want to visit for the views, and Goldfinch Tavern has great views but is more talked about for being part of the Ethan Stowell enclave.

The good news is there are a fair number of health-sensitive dessert shops in town. And they rock. NuFlours is entirely gluten-free, with a bunch of vegan options, and their store on 15th even has sandwiches. My spouse has been in love with NuFlours’s mint brownies for years, but they are dense chocolate treats.

Sugar Plum is vegan dessert overload. No, really. You might walk in thinking about their soft serve, but then there are tarts. And cookies. And ice cream. And a below eye level set of pastries. And granola. And then a freezer with more options. (As in, ridiculously huge sundae specials that could feed small armies.) It can be a lot to take in, so there’s no shame in asking for suggestions. I’m personally in for the seasonal soft serve. They just had strawberry rhubarb, which was delightful. Not too sweet, a hint of rhubarb sour. Good times.

Mighty-O Donuts sells egg and dairy-free doughnuts, with an excellent view at most of their locations for prime puppy viewing. (Seriously. Their Green Lake/Tangletown and Cap Hill spots? Pup central.) 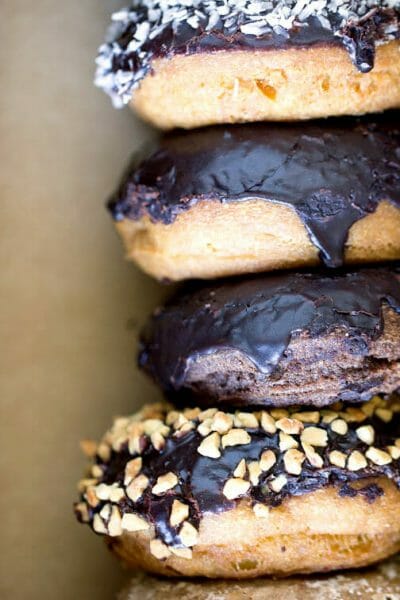 Given that the Cap Hill store is walking distance to Rodeo Donut and General Porpoise, you can probably cover every type of doughnut/donut preference in a few blocks.

If you’re looking for desserts in Seattle, you can’t go wrong with any of these spots on a food tour of Seattle! Your sweet tooth will be happy.