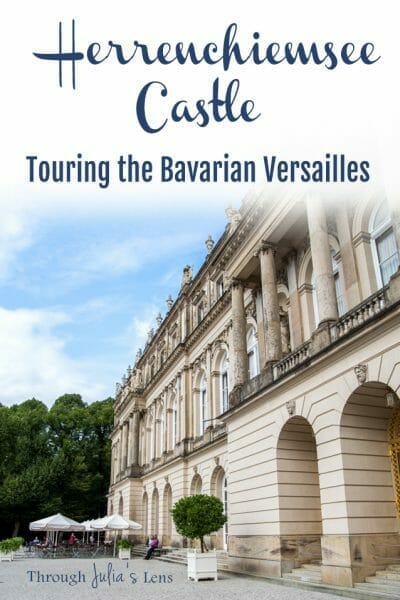 We parked at Prien am Chiemsee to park and catch the boat to Herrenchiemsee. We had some time before the next boat and were pretty hungry, so we grabbed some lunch at Hotel Neuer Am See. We both got different soups and sausage dishes, and everything was great! My soup was a curry soup with black sesame seeds, and it was one of the best dishes I had in Germany! 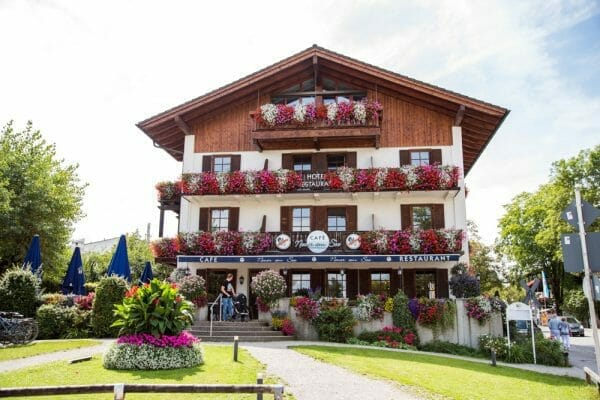 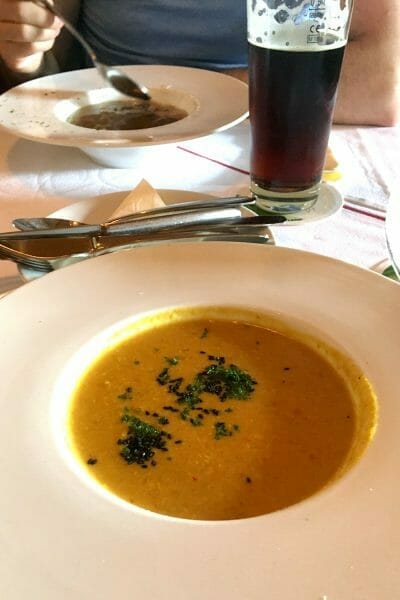 Sorry for the phone pics of my food! 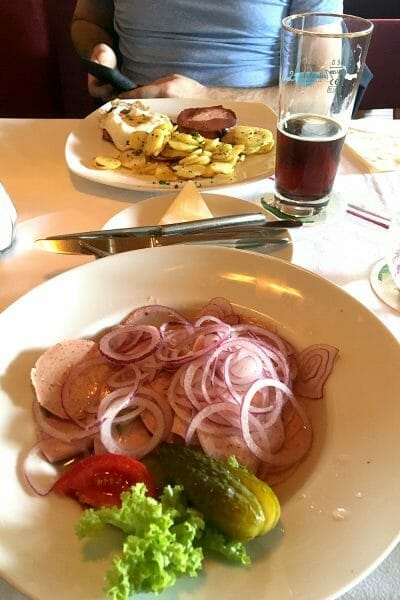 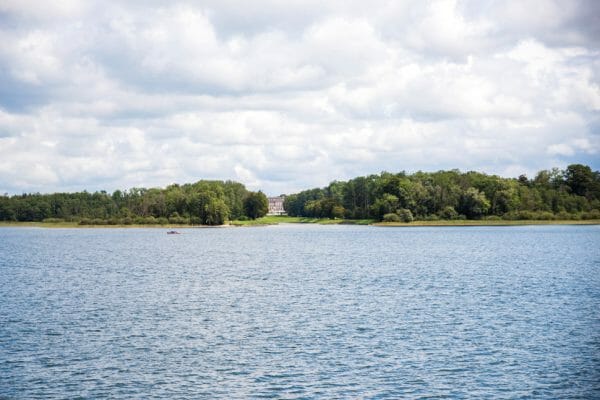 Like I said, Herrenchiemsee is in the middle of a large lake, so you have to take a boat to it. There are other islands on the lake, so you get to see some cool views and you can even stop off at some of the islands to explore them more. The timetable for the boat changes depending on the season, so make sure you check the schedule before planning your trip to Herrenchiemsee. 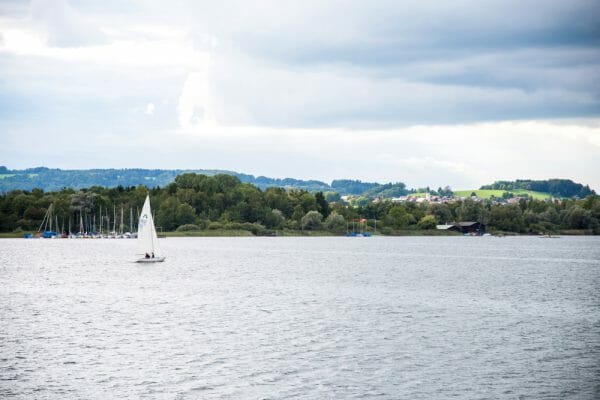 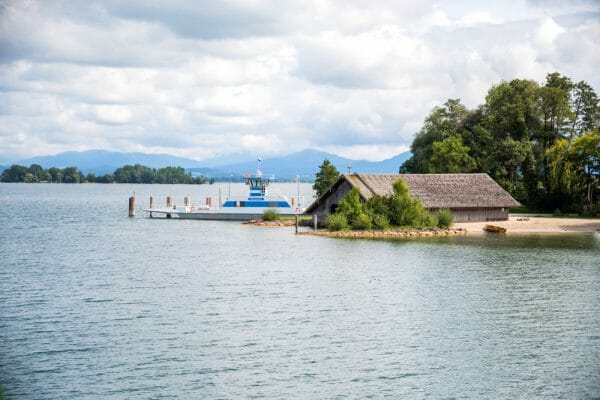 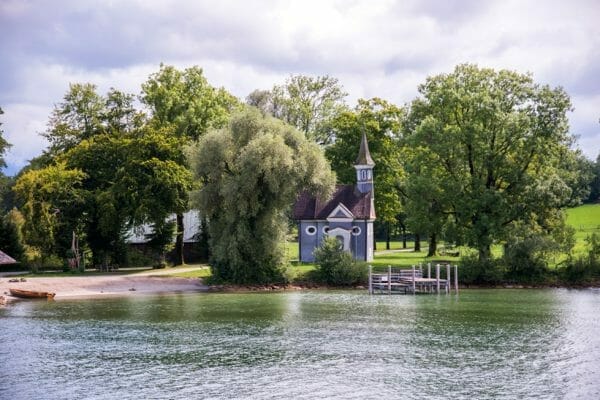 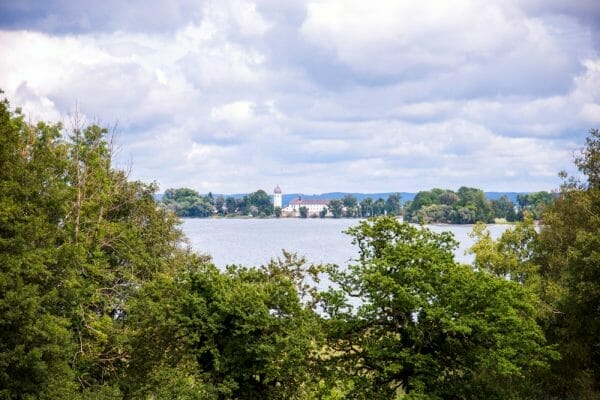 Herrenchiemsee is on the island of Herreninsel, and there are some other buildings on the island that you can check out. There’s an art exhibit in a former monastery (no photos allowed inside though) and a small stone chapel. And the island is pretty large, so there’s a lot to explore outside!

We didn’t realize that there were specific tour times for the castle (whoops), so we had quite a bit of time to kill before the next English tour. We walked all around the island and ate ice cream in the castle gardens (highly recommend if you’re there on a hot day like we were!). 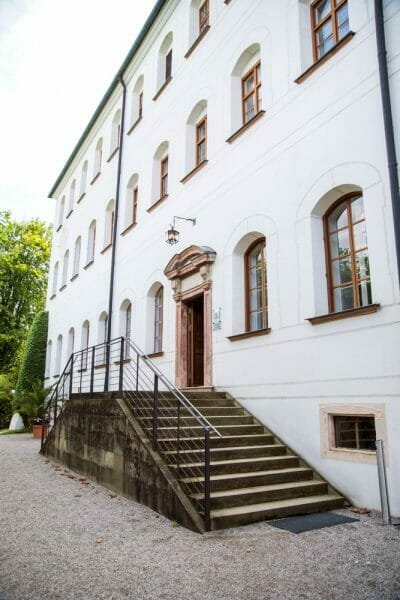 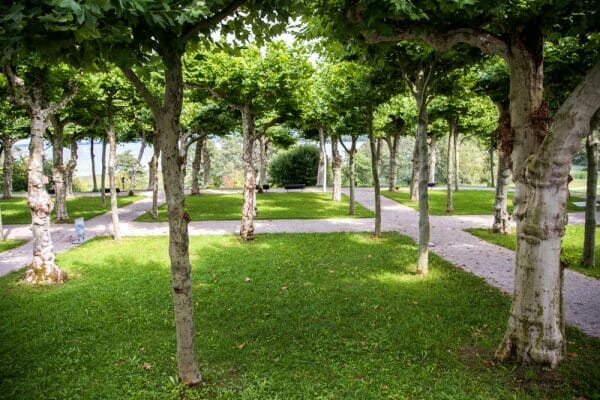 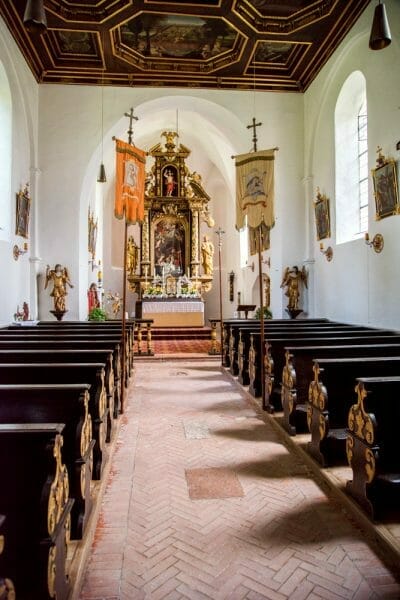 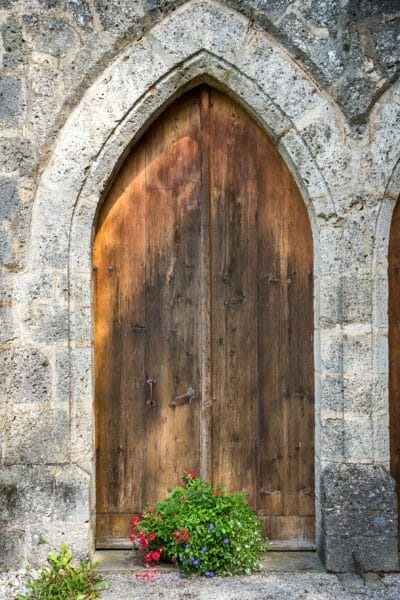 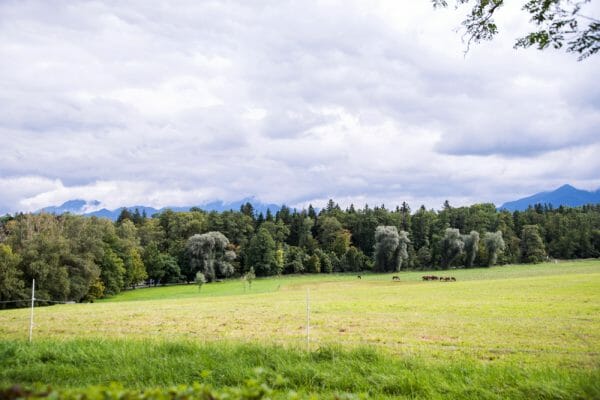 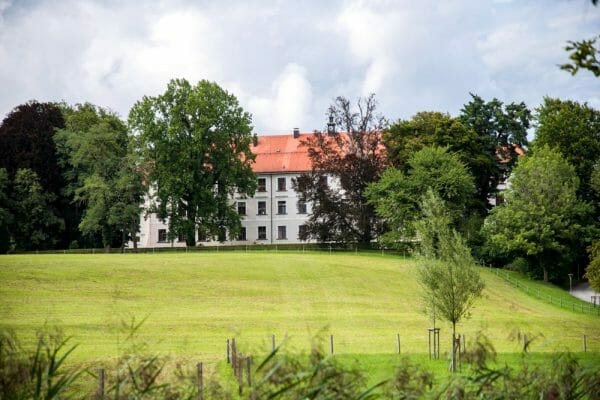 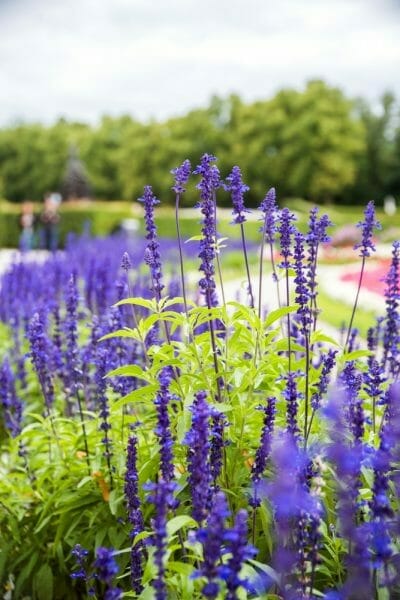 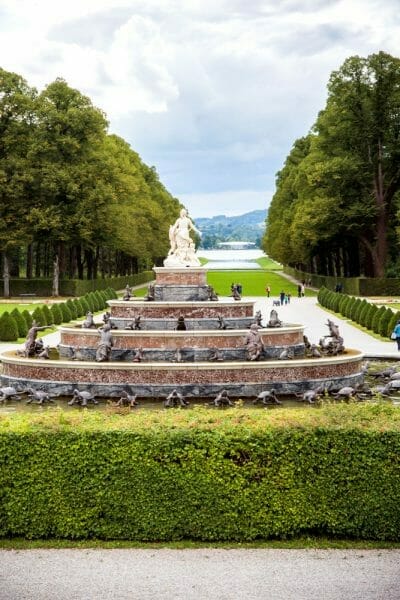 Sadly, you’re actually not allowed to take photos inside Herrenchiemsee! So you’ll just have to go see it yourself 🙂 But if you’ve been to Versailles, Herrenchiemsee is an EXACT replica on a smaller scale, including the famous Hall of Mirrors.

Ludwig II built Herrenchiemsee to be identical to Versailles because he greatly admired King Louis XIV and wanted to pay homage to him (and probably also because Versailles is an amazing castle). Ludwig II built many castles around Germany, including the famous Neuschwanstein Castle, and construction began on Herrenchiemsee in 1878. The castle was so elaborate and all the resources had to be shipped in across the lake that it was more expensive than Linderhof and Neuschwanstein castles combined! 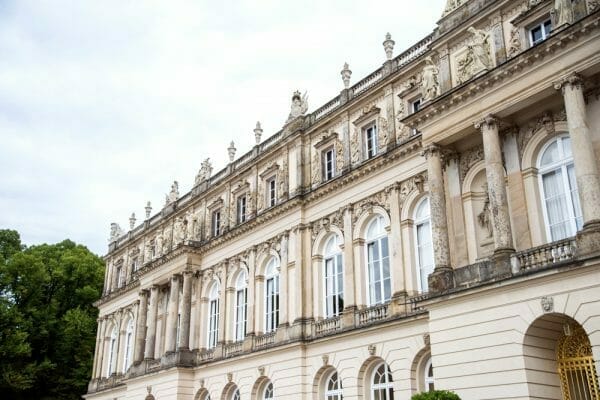 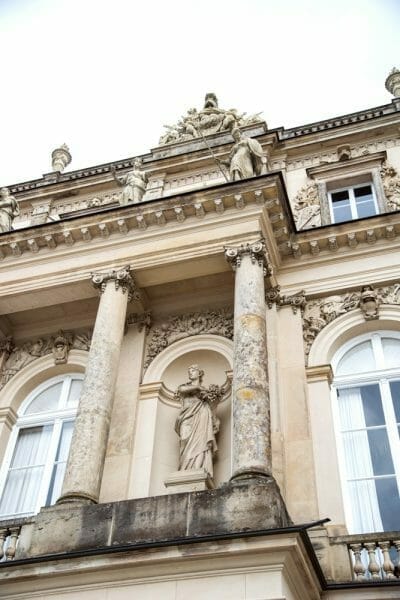 Ludwig II actually didn’t live long enough to see Herrenchiemsee completed. He spent a few nights in the castle when some of the rooms were completed, but he mysteriously drowned when he was only 40.

Our tour of Herrenchiemsee covered a TON of information about the building of the castle and the life of Ludwig II, so I definitely recommend taking a tour (especially so you can see the inside since photos aren’t allowed). They do offer it in different languages, so check and see what time your language’s tour will be so you don’t have a lot of extra time to waste like we did! 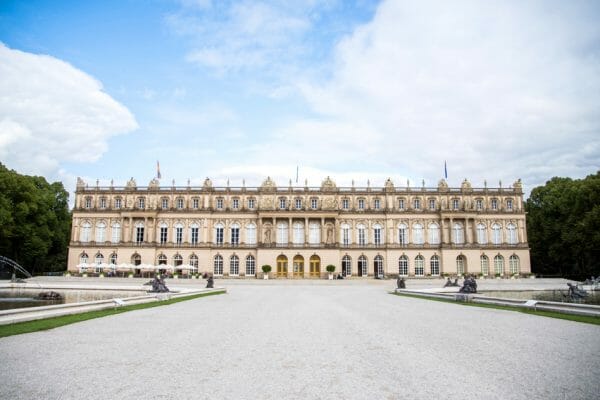 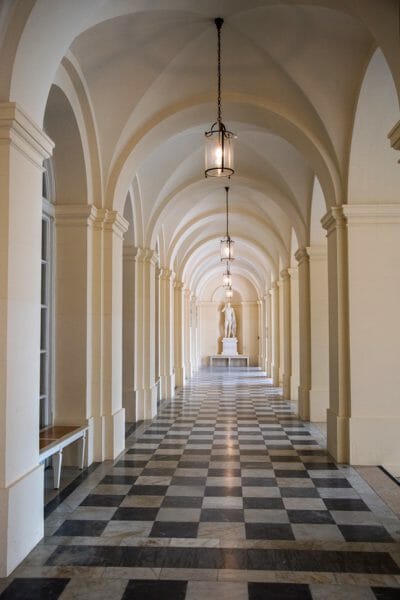 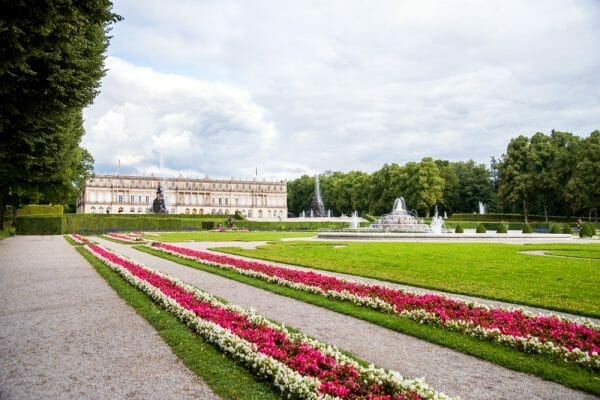 The total time we spent for Herrenchiemsee was about four hours, including the ferry ride time and the time we spent exploring the island. If you time it better than we did, you can do a shorter visit. But if you have time to spare, exploring Herreninsel and the other nearby islands is a great way to spend a day 🙂

« Burghausen Castle: Touring the Longest Castle Complex in the World