10 Amazing Things to See During a Weekend in Munich

Matt and I spent the last weekend of our honeymoon in Munich and had an amazing time! We had beautiful weather (although it did get a little hot) and saw tons of amazing sights. There’s a lot to do in Munich and you could probably spend weeks there and still not see everything beautiful sight, but if you only have a weekend in Munich, these are the top sights you can’t miss!

Amazing sights you have to see during a weekend in Munich 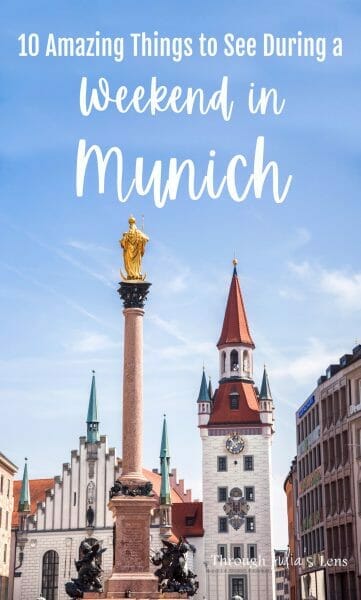 We saw a lot of the historic sights during our free walking tour with Sandemans, and if you have time for a tour, I highly recommend it! We got to see a lot of cool places and learn about the history and culture of Munich that you won’t see on something like Wikipedia. 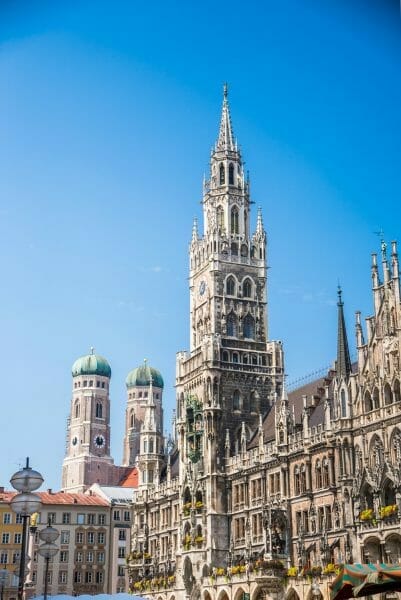 Munich’s town hall is one of the most incredible buildings I’ve seen! Construction started on the town hall in 1867 when it was decided that the old town hall was too small. I think the new town hall is probably big enough because it’s a MASSIVE building.

The glockenspiel is one of the most unique part of the town hall. Every day at 11 a.m. and 12 p.m. (and 5 p.m. in the summer), the glockenspiel at the top of the town hall has a little performance. Music plays and statues spin around to tell stories. The first one is about a famous royal marriage, and it ends with knights jousting. The second one is about the “coopers dance.” During a plague in 1517, people were scared and locked themselves in their homes, so coopers started dancing in the streets to cheer people up and encourage them to come outside. 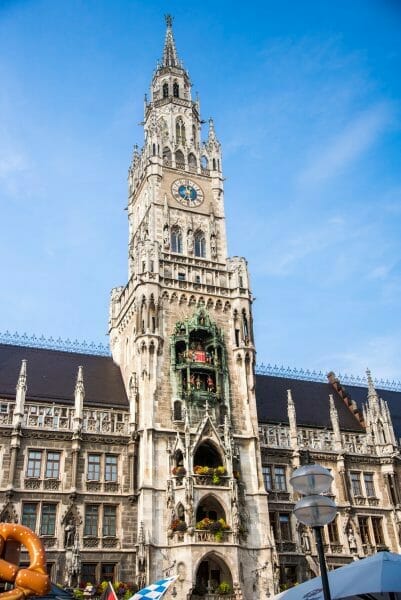 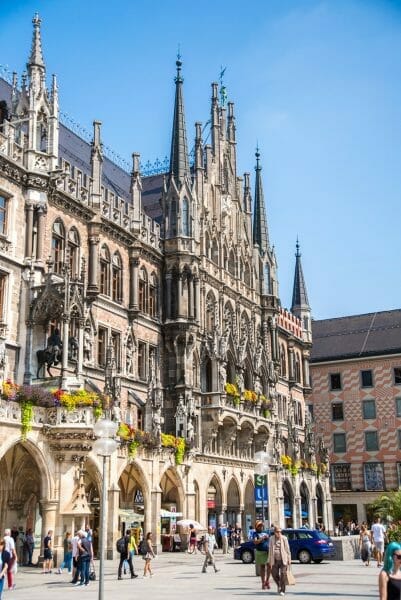 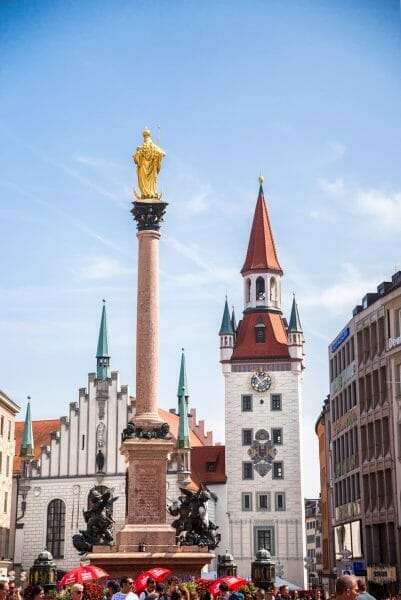 There have been a few different theaters at this spot since the 1800s, and there have been a few repairs and new construction done on the National Theatre. It was damaged badly during WWII, so the current theater was built in 1963 in the same style as the original. It sits next to Residenz and across the street from some beautiful, colorful buildings! We also had dinner on that block at Spatenhaus at the Opera and had a beautiful view of the theater at sunset. 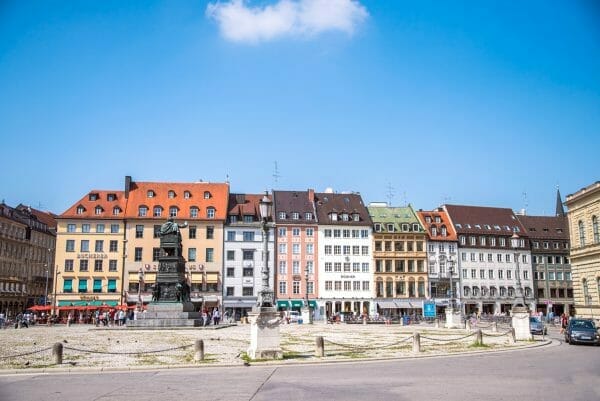 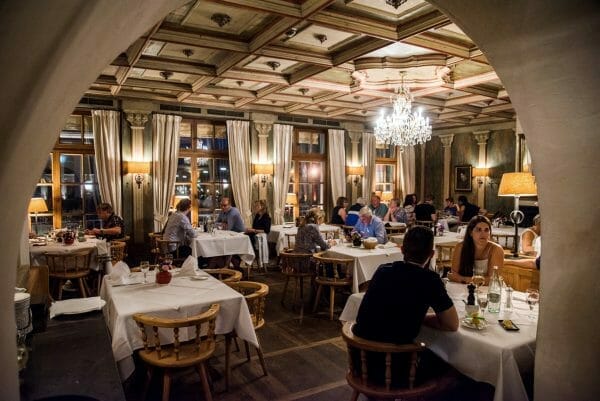 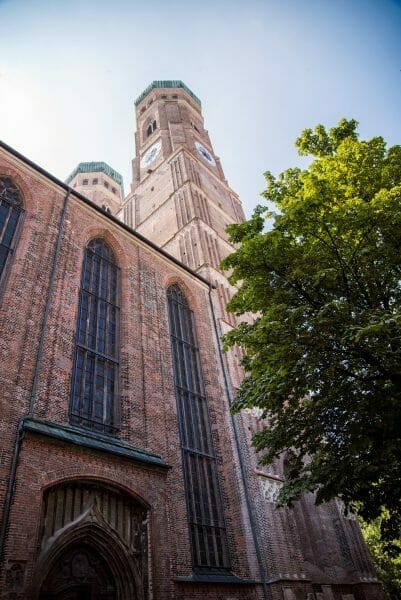 Frauenkirche is one of the churches we visited. It was built in the 15th century in the Romanesque style, and it’s one of the largest cathedrals in southern Germany!

Frauenkirche is famous for its “devil’s footprint,” which you can see in a photo below. Legend says that the devil made a deal with the architect not to have any windows in the church, but the architect tricked him and hid windows behind columns when you look at the sanctuary from the back of the church so the devil couldn’t see it. When the devil realized he had been tricked, he stamped his foot in the ground and left the footprint. Pretty interesting legend! 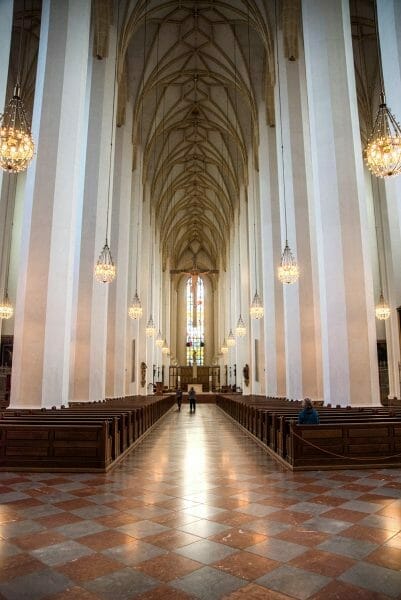 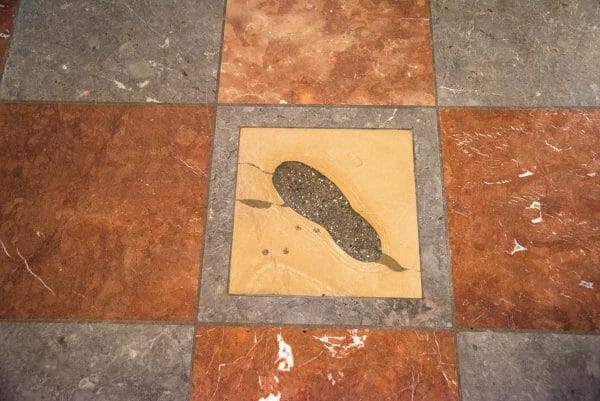 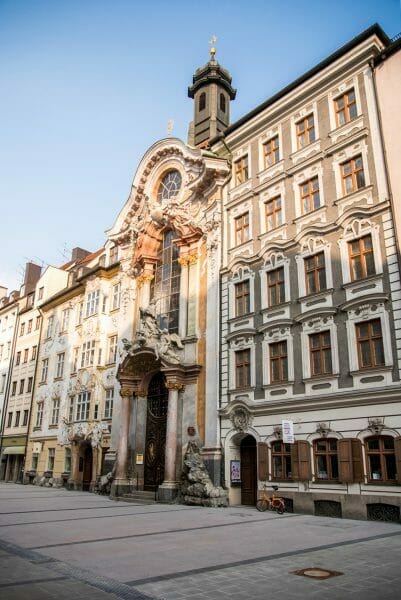 We didn’t get to go inside, but Asam Church is known for it’s beautiful Baroque style! It was built by two brothers in the 1700s, and since they were building it as a private chapel, they didn’t have any restrictions. The inside looks amazing, and the outside is definitely one of the most unique churches I’ve seen! We took a tour of Residenz, and there is so much more inside than you would think! Residenz started being built in 1385 as a castle, and it changed a lot over the centuries. From the 16th to the 19th centuries, it was the seat of government, and dukes and kings lived there.

The art and artifacts in Residenz start from the Renaissance period and span to the Baroque and Neoclassicism as the palace was built up and expanded. It was damaged during WWII, but it has been reconstructed since. It has some absolutely beautiful rooms, and I highly recommend taking a tour if you get the chance! 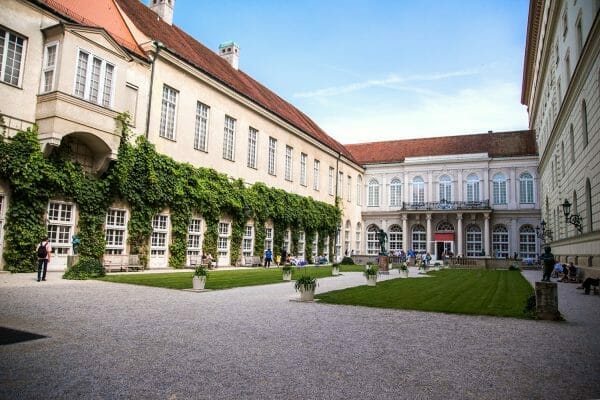 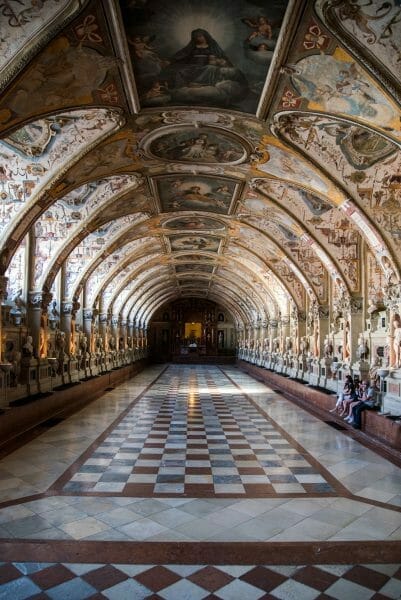 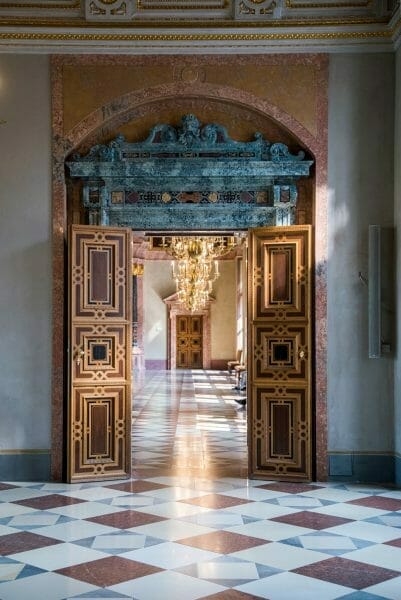 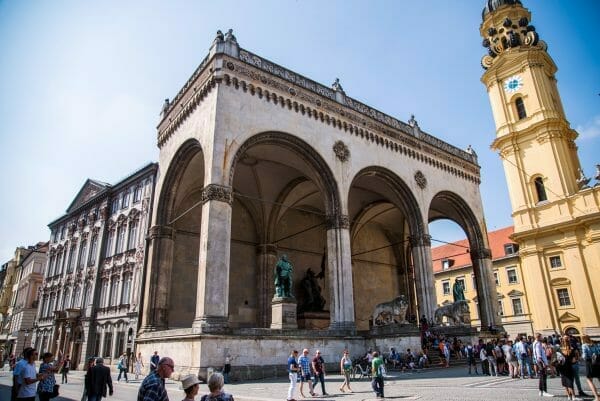 Odeonsplatz is a square surrounded by beautiful buildings! Theatine Church, a yellow church built in the 1600s, is on one side and Feldherrnhalle, an army monument, is on the other. There were lots of people just hanging out and taking in the sights, which is a great idea for a beautiful day. 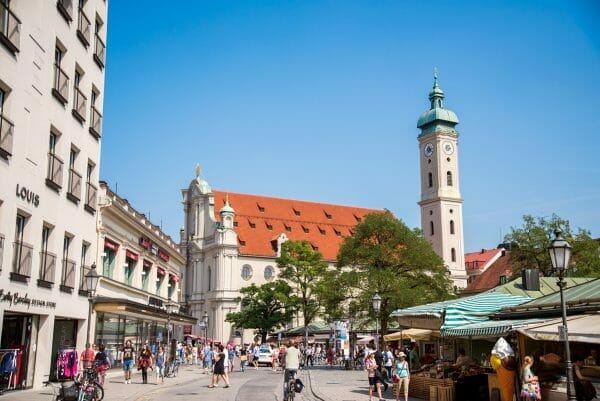 There are lots of places to do shopping in Munich, and you should visit some of the markets while you’re there. We strolled through Viktualienmarkt a few times, and there was so much delicious food and pretty souvenirs! If we had a cooler, I would have stocked up on all the cheese we saw.

Take a stroll through the park and watch river surfing 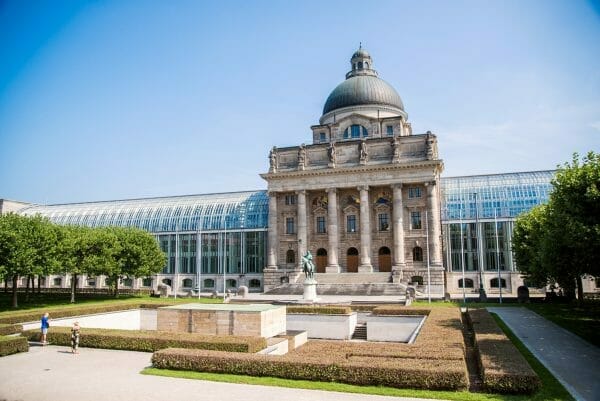 We walked through the English Garden and watched river surfers! I had never heard of river surfing before, but there’s a spot on the Eisbach where rapids are produced so people go there to surf. It was a pretty cool sight to watch, and I know I would not have been able to surf like that! 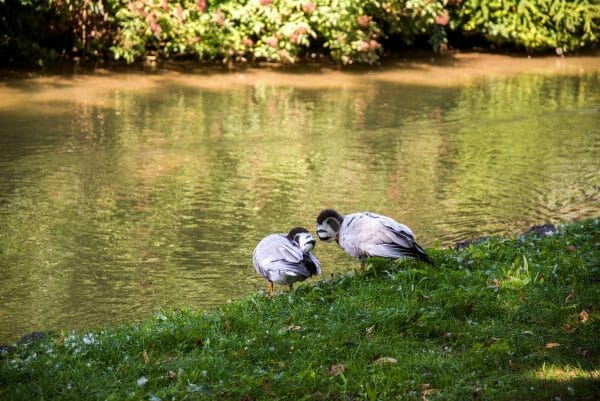 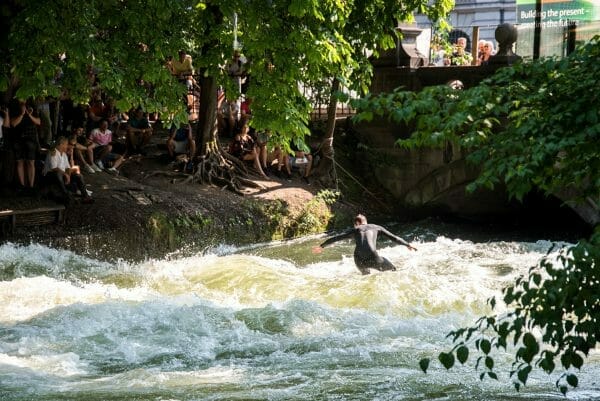 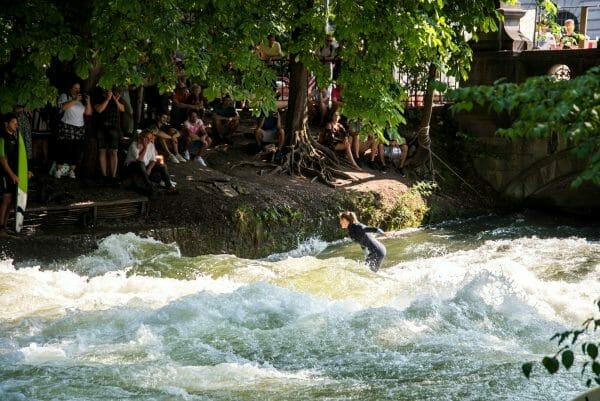 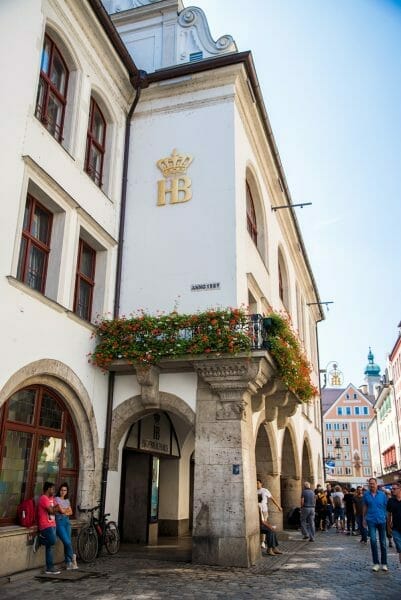 You can’t go to Munich without visiting Hofbräuhaus! Hofbräuhaus is a beer hall dating all the way back to the 1500s, and it’s famous around the world, especially for Oktoberfest. Matt and I preferred the food at other beer halls and bars, but you should go for the experience and beers. There are visitors from all over the world, and bands play music- it’s like a big party! 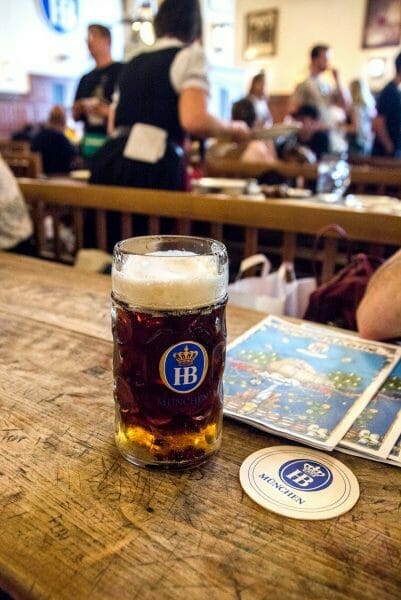 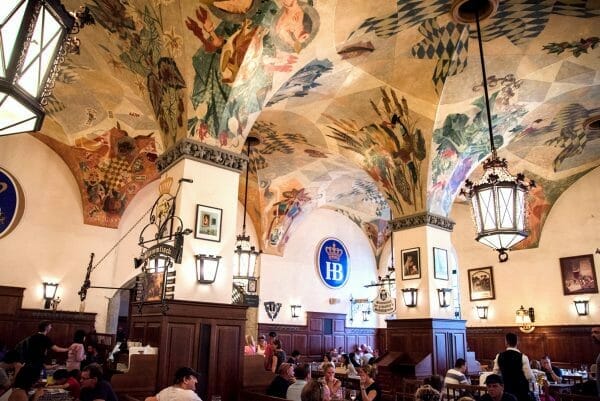 There are also lots of amazing places to get German food and pastries, so if you’re spending a weekend in Munich, be sure to take in all the sights AND eat lots of delicious food!

« A Historic Tour of Munich: The Best Way to See Old Town Munich