Exciting news!!! Today is my ONE year anniversary of moving to Philadelphia! 🙂 It really flew by! There have been ups and a few downs, and I’ve definitely learned a lot about Philadelphia in the past year. It’s a fascinating city, and I feel like I’ve only scratched the surface! Here are 11 things I’ve learned about living in Philadelphia, and I’m sure I’ll learn a lot more in the next year! 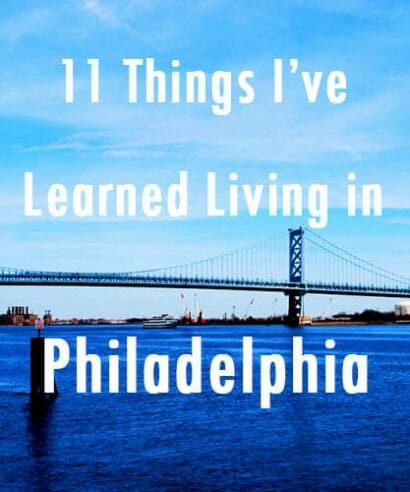 1. It is very dog friendly

Since Annika needs lots of walking, this is a HUGE plus for me! I’ve seen everything from banks to cafes to bars have water bowls outside, and places like Dirty Frank’s Bar and Chapterhouse Cafe even allow dogs inside. There are lots of dog parks, and people are constantly stopping me on the street to pet Annika or ask me questions about her. If you’re worried about having a dog in the city like I was at first –  don’t be! And don’t be afraid to ask for help; when I needed a short term dogwalker, lots of people contacted me and were really excited about it!

Lots of people have dogs here, and while it can be trickier to find a dog-friendly apartment or walk a dog in the rain, it’s definitely manageable and you’ll get a lot more exercise. (I also recommend any of the Doggie Style locations around Philly for pet supplies and grooming!) 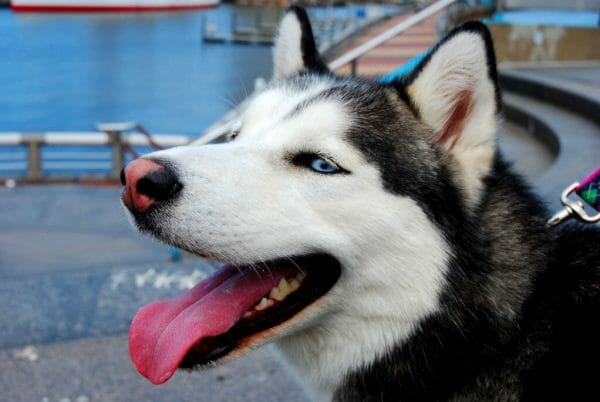 Annika loves exploring and being petted by everyone! (Photo from Penn’s Landing in Color)

2. Everyone is pretty chill

I’m used to Washington, D.C. city life, so Philadelphia city life is way slower paced. There are a lot of young families (and dogs), so it’s more of a residential city than places like New York City or Washington, D.C. There are also pretty laid back things like drinking in public for the Mummer’s Parade (as long as you don’t get drunk and rowdy!), and opening fire hydrants in the summer for kids to play in the water. The fire department even supplies sprinkler-like attachments to cut down on water waste because so many people do it. I definitely prefer this kind of city life!

3. The drivers have no chill

Most people in Philadelphia are chill… except drivers. Driving in Philadelphia has been quite the experience. It’s basically like there aren’t any rules and people just do what they want, and when people don’t follow the rules that you made up, you lay on your horn for half a mile. People also run red lights like I’ve never seen before. They’ll stop and sit at a red light and when no one is coming through the intersection, they’ll go! It’s the strangest driving I’ve ever seen. So if you have to drive in Philly, just be wary.

The art around Philadelphia is awesome! Like I said in my art museum post, there are tons of murals and mosaic art designs on buildings all over the city, and even trash cans are sometimes decorated. There are multiple incredible art museums and fun places like Magic Gardens (stay tuned for a future post when I tour there!). If you’re an artist or just love finding art around every corner, Philadelphia is the place for you! 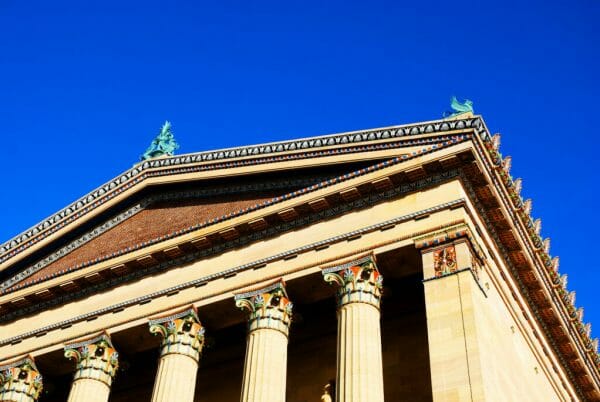 One of the coolest things about Philadelphia is how many local restaurants there are. Sure, there are Starbucks and I think I’ve seen one McDonald’s, but there wasn’t a Cheesecake Factory until about a year ago (and if you’re visiting Philly you need to try at least one cheesesteak and my new favorite things are cheesesteak eggrolls!). When people talk about their favorite restaurants, I’ve never once heard someone mention a chain restaurant because the local ones are so amazing! Some of my favorites are Sawatdee (Thai, amazing, AND very affordable), Mercato, Tria Cafe (AMAZING cheese), Caribbean Delight, R2L, and Noord eetcafe (Scandinavian and Dutch food and the BEST bread I’ve ever had!). There are so many restaurants in Philly to choose from!

Which brings me to my next point! Philadelphia knows how to brunch, and it’s pretty huge on the weekends (go early so you can get a table!). Brunch is probably my favorite meal because you can have breakfast or lunch food or both, and I’ve tried out a lot of places. I haven’t had a bad brunch yet! My favorites are Noord eetcafe (yes, this made both lists!), Little Spoon, Hawthorne’s, Rex 1516, Honey’s Sit N’ Eat, The Dandelion, and Sam’s Morning Glory Diner (most legit and amazing diner I’ve found in Philly so far). I’m also a huge fan of bagel places like Spread Bagelry (Montreal style wood oven bagels) and Knead Bagels (they have amazing cream cheese combinations)!

7. It has lots of quirks and traditions

The Mummers Parade is probably the quirkiest tradition Philadelphia has, and it’s awesome! Basically, people dress in crazy, themed costumes and parade down Broad Street for hours on New Year’s Day. You can read about its fascinating history here. Another crazy quirk is that people park on the median and turning lanes on Broad Street. It technically isn’t “legal,” but they tried to give people parking tickets for parking there in 1961, and 2,000 people threw tomatoes at the mayor!!! Needless to say, they haven’t given tickets since. 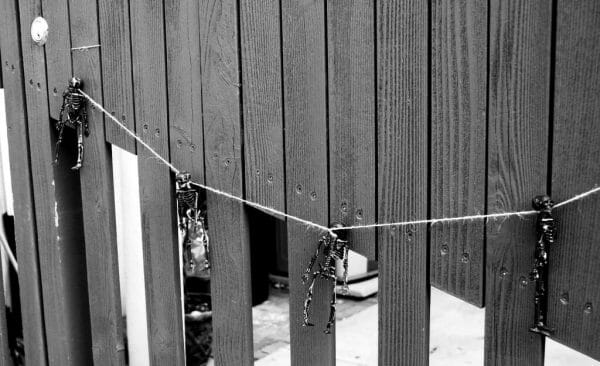 I came across these skeleton decorations in January – well past Halloween! (Photo from Hidden Details)

8. There are tons of parks and open green spaces

I have been pleasantly surprised with all the parks and open spaces around Philadelphia! (I’m so happy about it that I have multiple blog posts on them!) I really wasn’t expecting so many parks in such a big city, but people in Philadelphia are actually really active and enjoy being outside (beer gardens and Spruce Street Harbor Park get super crowded when the weather is nice!). There are lots of little gardens, and some of my favorite spots are Washington Square West, Rittenhouse Square, Penn’s Landing, the Schuylkill River Trail, Hawthorne Park (a hidden gem!), and even the Philadelphia Museum of Art has a huge park around it! It’s really incredible how green Philadelphia really is (there are also larger parks right outside the city if you enjoy hiking!). There’s a chance that I might be a *huge* history nerd, and Philadelphia does not disappoint with history! Yes, there’s the Liberty Bell and Independence Hall, but there’s way more than just the tourist spots! You can just wander around Old City Philadelphia and see amazing old buildings and hidden spots like Elfreth’s Alley, and even outside Old City there are awesome museums like the Rosenbach Museum and the American Swedish Museum (did you know that Swedes were in Pennsylvania before William Penn? Read about that piece of history here). Old rowhomes around Philadelphia are beautiful, and you can just walk around anywhere and find tons of historical markers. I’ve seen a historical marker on Lombard St. for a person I’ve never heard of because he was a prominent sailmaker! How cool and random is that? You have the Eagles, the Phillies, the Flyers, and the 76ers (and probably a few more teams!), and Philly is proud of all of them! I didn’t realize hockey was so popular until I saw everyone walking around in orange Flyers jerseys! Even if a team is doing badly, Philadelphians are still loud and proud, and you’ll see jerseys everywhere you go. I finally went to my first Phillies game (and got crab fries!), and I’m looking forward to checking out all the other sporting events!

11. It’s a great community and a fun, beautiful place to live

Basically, there’s something for everyone in Philadelphia, and I love living here! It’s very different than what you would expect from typical, busy city life, which I definitely appreciate. Sure, not everything is perfect, but I’ve had great experiences with friendly people and I love the community aspect! I mean, 2,000 people coming together to throw tomatoes at the mayor in 1961 gives you an example of the tight community here! 😉 When we had the Jonas blizzard this past winter, people came together to play in the snow or help people dig their cars out! Living here for one year flew by, and I’m looking forward to adventures in Philadelphia in the coming years! 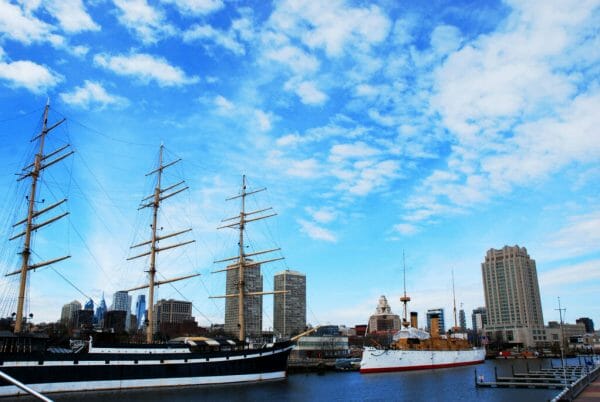 What have you learned from living in or even just visiting Philadelphia? Comment below! 🙂